Havana Red was bought immediately after the 2018 Scandinavian Open Yearling Sale, having previously been pinhooked at the Goffs November Foal Sale by Stutteri Stork.

She was the first purchase of our 2017 born crop and she also became the first winner wearing the The JC Organization colors.

As a 3yo Havana Red progressed from winning the Swedish Derby Consolation to finish 2nd in both the Swedish and Danish Oaks, before winning the Norwegian Oaks – sending her up among the highest rated 3yo fillies of 2020.

Her 3yo campaign ended with a 3rd placed in the former Listed event Jockeyklubbens Avelslöpning at Jägersro.

As a 4yo Havana Red has continued her rise towards the top, winning Kopparmärralöpning and Fred Armstrong Cup as well as finishing second in the Erik O Steens Memorial.

On August 15 she reached a career-best OR of 98 after an easy win over 2200 metres in Gothenburg, and on 18th September she swept clear in the Fabellaløb over the same distance at Klampenborg.

On her reappearance at 5, she finished 4th in Forårs Cup at Klampenborg behind behind a strong trio of Group performers. After a 3rd place finish in the Erik O Steens Memorial at Øvrevoll she was back to winning ways, taking both  the Kopparmärralöpning at Gothenburg and The Fabellaløb at Klampenborg for the second consecutive year.

Havana Red was born in Great Britain and hails from the third crop of G1 winning sire Havana Gold (by Teofilo) – pictured.

She is out of Rinskia (by Bering), a 3-time winner in France and the producer of three other winners in France, USA and Denmark.

Rinskia is a half-sister to G3 winner Simplex (by Rainbow Quest) and to Bounce (by Trempolino) – the dam of Scandinavian champions Hurricane Red (by Hurricane Run) and Icecapada (by Mastercraftsman). 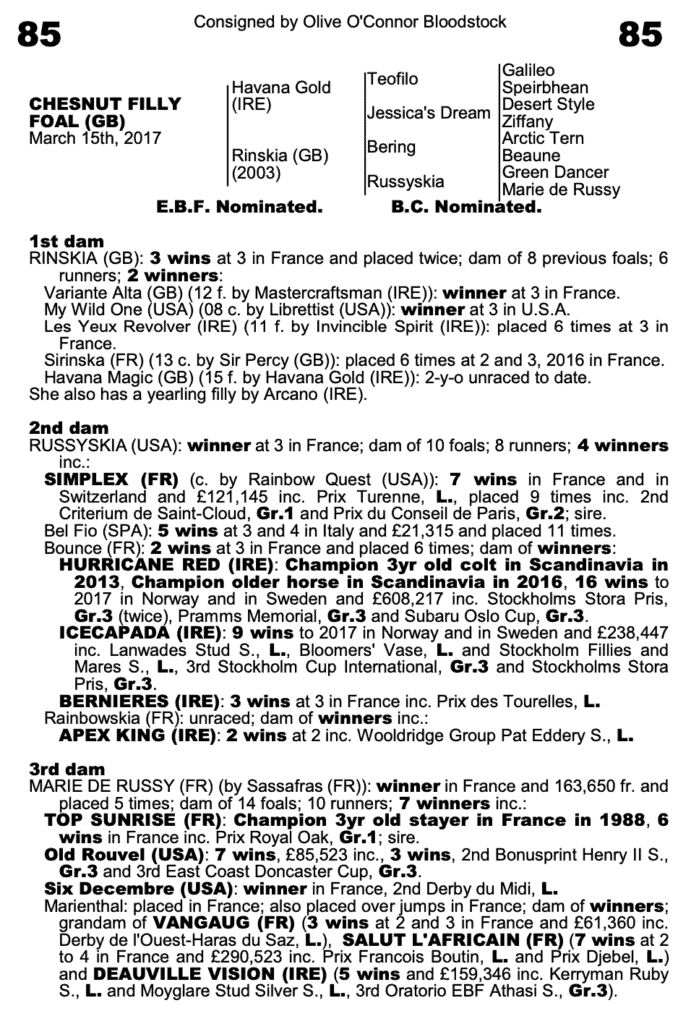