A strong, fast-looking colt. He made his debut on Swedish Derby Day 2020, winning by a head from Reunion Island.

He followed by finishing a short neck second to that same rival in the Lambada Cup, seemingly finding the 1200m too short.He won easily over a mile while carrying top weight on 11 October, followed with a runner up performance in the Skånelandlöpning to end his 2yo campaign with 2 wins and 2 seconds from 4 starts.

Wolfof Vancouver was honored with the Champion 2YO of 2020 title in Sweden.

Wolfof Vancouver won the 2021 edition of the €100,000 Voter and Hurccinanelöpning at Jägersro and finished 2nd in the Swedish Derby – by the smallest of margins.

He came back for his 4yo campaign finishing 2nd in the Listed ITM Spring Mile at Jägersro, and subsequently 3rd in the Listed Pramms Memorial, before he reversed the from from the latter race to secure the 1.000.000 SEK Valley Chapel Memorial on Swedish Derby Day on July 17.

Wolfof Vancouver is bred in Ontario, Canada, and a son of G1 Breeders’ Cup Sprint winner, Sire of Sires and Millionaire Eclipse Champion Speightstown (by Gone West) – pictured – who stands for a stud fee of $80,000 at WinStar Farm in Kentucky.

Wolfof Vancouver is out of Lookalike (by Dynaformer), a four-time winner on the turf in North America and already the dam of three winners from as many runners in USA and Japan.

She is herself a half-sister to the dams of G3 Discovery Handicap winner Called To Serve, G3 Clasico Jose Pedro Ramirez winner Vos and Listed winners Bridgehampton and Saritta. 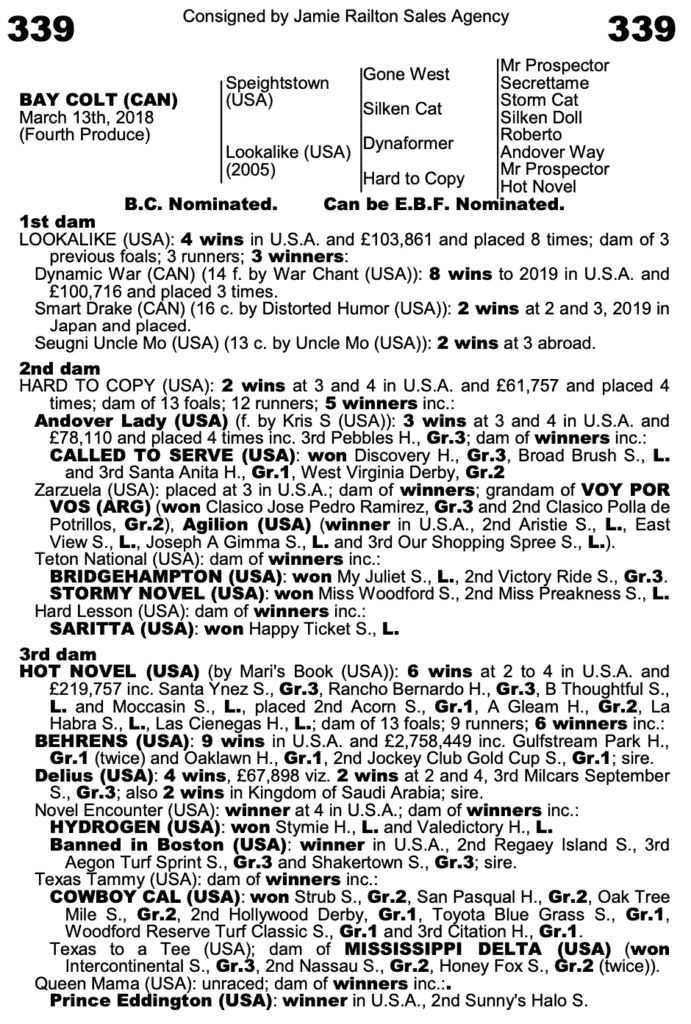